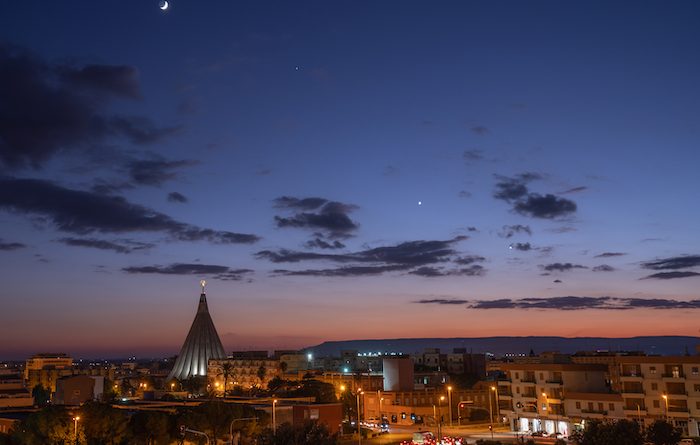 
Venus crosses into Sagittarius Nov. 1 and is visible within half an hour of sunset, low and bright in the southern sky. At magnitude –4.5, it is unmistakable. Venus crosses the broad swath of the Milky Way during the first two weeks of the month. The planet stands less than 3° south of the Lagoon Nebula (M8) on Nov. 6, offering astrophotographers a fine target. Take your time framing Venus and the Milky Way, along with foreground features silhouetted against the sky.

On Nov. 7, a slender crescent Moon stands roughly 3° west of Venus. Earthshine makes the unlit portion of the Moon visible against the Milky Way for those with a good view of the western horizon and clear, transparent air. View Venus through binoculars on Nov. 14 and look for the misty smudge 3° north — this is magnitude 5 globular cluster M22. Also check out Venus on Nov. 19, when it sits a half-Moon’s width from the 2nd-magnitude star Nunki (Sigma [σ] Sagittarii).

Through a telescope, Venus reveals a 48-percent-lit disk spanning 26″ on Nov. 1. Watch it change throughout November, slimming to a fine 29-percent-lit crescent by Nov. 30 and increasing to 39″ wide.

By the end of November, Venus, Saturn and Jupiter span a 35°-long stretch of the ecliptic across the southwestern sky. Saturn and Jupiter both lie in Capricornus the Sea Goat all month. Between Nov. 7 and 11, a waxing crescent Moon follows this line of planets.

We’ll visit Saturn next, which lies in the constellation’s western half and moves slowly eastward as the month progresses. Saturn is visible as twilight descends and sits farther along the ecliptic than Venus; consequently, it remains visible longer, setting soon after 11:30 P.M. local time on Nov. 1 and by 9 P.M. on Nov. 30. It starts November at magnitude 0.5 and dims by 0.1 magnitude by month’s end. A waxing crescent Moon lies in its vicinity Nov. 9 and 10.

The best telescopic views of Saturn occur within a few hours of sunset. By 10 P.M. local time Nov. 1, Saturn is less than 20° high, so our atmosphere distorts the view. Saturn’s disk spans 17″ and the rings’ major axis stretches 38″ wide. The increasing distance between Earth and Saturn this month reduces its size by a barely noticeable 5 percent during November. Saturn lies 10.4 astronomical units or 967 million miles from Earth by the end of the month.

The fine ring system is tilted by 19° to our line of sight, showing off their northern face while the southern hemisphere of the planet peeks out below the outer Ring A.

Three fainter (magnitude 10) moons orbit closer in. Tethys, Dione, and Rhea swap positions quickly, sometimes noticeable in an hour or so. Enceladus is challenging to spot at magnitude 11.7, close to the bright rings.

Iapetus reaches inferior conjunction Nov. 18, when it appears closer to Saturn than usual. It lies within 1′ of the planet from Nov. 17 to 19. Iapetus moves west of Saturn in the latter half of the month, turning its brighter face earthward. See if you can spot this moon shining at about 11th magnitude midmonth, and slightly brighter toward the end of November.

Brilliant Jupiter shines at magnitude –2.5 in eastern Capricornus and remains about 16° east of Saturn all month. It moves slowly west; its motion relative to 3rd-magnitude Deneb Algedi will be obvious every few nights. It lies 1.9° northwest of the star on Nov. 1, passes due 1.6° north Nov. 22, and moves to a point 2.2° northeast of the star by Nov. 30.

The best views of Jupiter occur in late twilight, when it stands one-third of the way from the horizon to the zenith in the southwest. The fine cloud features, the twin dark equatorial belts, and the Great Red Spot are visible through small telescopes. The planet’s brisk rotation (just under 10 hours) shows features changing position within a single evening. Jupiter sets soon after midnight on Nov. 1 and by 11 P.M. local time on Nov. 30.

Its four Galilean moons wander with periods of 1.8 to 17 days. Each moon also undergoes occultation by Jupiter, is hidden by Jupiter’s shadow in an eclipse, and transits with its associated shadow across the disk. The narrow observing window reduces the number of observable mutual satellite events, but two this month are worthy of attention. Note that more events occur than are listed here.

On Nov. 19, find Io just off Jupiter’s eastern limb and Ganymede near the western limb. Io begins to transit the disk at 8:33 P.M. EST and is joined by its shadow at 9:53 P.M. EST. Ganymede approaches the western limb of the planet and disappears in an occultation at 10:35 P.M. EST, while Io and its shadow are still on the disk.

Astronomers model the dog-bone asteroid, Kleopatra, like never before