Cassiopeia the Queen is easily recognizable in the northern sky, thanks to the W-shaped asterism formed by five of her stars. Tonight, swing your gaze in her direction to find NGC 663, an open cluster of stars also known as the Horseshoe Cluster.

Located about 1° southwest of the midpoint on a line drawn between Epsilon (ϵ) and Delta (δ) Cassiopeiae, NGC 663 contains about 400 stars and stretches 15′ across. If you’re viewing from an extremely dark spot after the Moon has set, you might see this cluster with the naked eye, but binoculars or a small telescope will easily pick it up from any location.

The cluster lies in a rich region of the sky, surrounded by numerous other clusters nearby. One is M103, another open cluster with about the same visual brightness but a much smaller, compact size of only 6′. Make sure not to confuse it with NGC 663, as the two look slightly similar. You’ll find M103 much closer to Delta Cas, about 1° northeast of the star — a little less than half as far as NGC 663 from Delta’s location.

Comet 67P/Churyumov-Gerasimenko is flying high right now in the constellation Gemini the Twins. Today, it’s less than 1.5° due south of bright 1st-magnutude Pollux, the constellation’s beta star and one of the Twins’ heads. You can catch the comet either late tonight before midnight, or early tomorrow morning before sunrise, thanks to the constellation’s current position in the sky.

Churyumov-Gerasimenko has a rubber duck-shaped nucleus that was studied up close by the Rosetta spacecraft several years ago. The comet has a period of 6.44 years and reached perihelion, the closest point to the Sun in its orbit, just one week ago. It has recently been recorded at magnitude 9.7 — fairly bright and not much dimmer than the famous Crab Nebula (M1) nearby in Taurus. If you’ve got good, dark skies, a 4-inch scope should net you both in the same field of view at low power. If you’re under light-polluted skies, you’ll want more aperture for a good view.

Also don’t be afraid to bump up the magnification and zoom in on the comet. Higher magnification will make it appear dimmer, but give your eyes some time and try tapping the scope — gently! — to make the small fuzzball pop out in your vision as your eyes’ motion-detector circuits kick in.

If you’re up early — and up for a challenge — Mercury and Mars sit less than 1° apart this morning. To spot them, you’ll need a clear eastern horizon and an alarm set to alert you just before the Sun rises. At that time, put your binoculars or telescope away to avoid accidentally damaging your eyes.

The two planets are barely 4° high 30 minutes before sunrise. Mercury is brighter at magnitude –0.9, while the Red Planet is a fainter magnitude 1.6 — difficult to spot in the encroaching dawn without optical aid. Through a telescope, Mercury is 5″ wide and 94 percent lit, while Mars — physically larger but also more distant — stretches 4″ across.

The Moon passes 4° south of Saturn at 9 A.M. EST. This pair will be easier to catch, still fairly high in the south at sunset. The Moon will then be 6.2° southeast of the magnitude 0.6 planet, working its way toward Jupiter to the east. It will meet up with the solar system’s largest planet tomorrow.

Saturn looks stunning through a telescope, its rings stretching 38″ across. Those rings are currently tilted 19° to our line of sight, showing us their northern side. Once it’s fully dark, look also for Saturn’s brightest and largest moon, Titan. Tonight, it sits just less than 3′ due east of the ringed planet, glowing at magnitude 8.8. Even with the relatively bright crescent Moon nearby, you should be able to spot it. It’s headed toward the planet’s south and will sit due south of Saturn in just four days.

First Quarter Moon occurs at 7:46 A.M. EST. Our satellite then passes 4° south of Jupiter at noon EST. By sunset, the two are just over 5° apart, with Jupiter now slightly northwest of the Moon.

All four of Jupiter’s Galilean moons are on display early tonight, with Europa sitting alone to the planet’s east and Io (closest), Ganymede, and Callisto (farthest) stretching out to the west. But just wait — around 9:17 P.M. EST, Io disappears behind Jupiter’s large disk. Although it clears the disk less than two hours later, it won’t reappear until after the planet has set. That’s because Io also has to trek through Jupiter’s long, dark shadow, which stretches far east of the planet.

Fortunately, Jupiter has more to offer: Its Great Red Spot is on display tonight, rotating into view shortly after sunset and appearing about midway across the disk at 8:53 P.M. EST. Use the spot to track Jupiter’s fast rotation; the planet makes one full revolution in less than 10 hours. 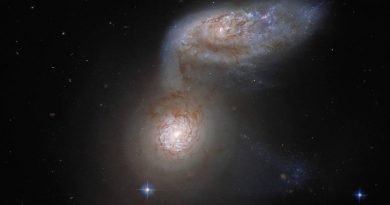