Cepheus the King is a house-shaped pattern of stars that circles Polaris as one of several circumpolar constellations. That means it’s typically high and easy to observe from many locations in the Northern Hemisphere.

Tonight, let’s zoom in on Herschel’s Garnet Star, a ruby red-colored point of light also cataloged as Mu (μ) Cephei. This 4th-magnitude luminary, also called Erakis, is located in the southern part of the constellation, about 1.5° south of the center point on a line drawn between Alpha and Zeta (ζ) Cephei.

Mu is a cool but bright supergiant star that is one of the most luminous suns in our galaxy. Although its relatively low temperature certainly contributes to its red color, the veil of galactic dust that sits between us and this star further reddens its glow. Mu is also a variable star, which brightens and then fades again over a period of about 800 to 1,000 days.

The International Space Station, or ISS, zips around the planet about once every 90 minutes at an altitude of 250 miles (400 km). This orbit is ever-changing, so it doesn’t always pass over the same place twice every time, but you can easily determine if and when the ISS is visible from your location.

When you do see it, the glow comes from sunlight reflecting off the station’s exterior as it orbits high overhead, even if you can’t see the Sun from your location. (It’s the same reason artificial satellites are visible in the night sky.) It generally takes a few minutes for the ISS to cross the sky from a given location, and this morning, those in the midwestern U.S. can catch it beginning just before 6:15 A.M. (All times in CDT.) The station will pop into visibility in Aries and move up toward the North Celestial Pole near Polaris, then sink back to the horizon in Boötes and disappear just before 6:20 A.M. It will reach a height 48° above the horizon in the north-northwest around 6:16:30 A.M., blazing a bright magnitude –3.4. You can find out more, including whether it’s visible from your specific location, at heavens-above.com.

This is actually the second of two passes the ISS will make this morning; it is briefly visible for about two minutes starting just before 4:42 A.M., but crosses only a very small region of the sky, from Leo to Coma Berenices, and is a much fainter magnitude –0.3.

Mercury reaches greatest western elongation at 2 A.M. EDT, when it stands 18° from the Sun. From the midwestern U.S., the small planet rises around 5:50 A.M. local time and has climbed nearly 12° above the horizon 30 minutes before sunrise. It’s blazing a bright magnitude –0.5 in Virgo.

Mercury currently spans 7″ and is 57 percent lit. Despite the fact that it will now slowly start moving back toward the Sun in the sky, the speedy planet should remain easy to find in the morning for now. It will continue to brighten a few tenths of a magnitude by the end of the month.

If you step outside early enough to catch a few stars still shining, you’ll see that Mercury sits about 3.5° below magnitude 2.7 Porrima (Gamma [γ] Virginis). Porrima is one of the northern sky’s most famous double stars, so take a peek in a telescope if you’ve got time. At times its stars come too close to separate without a large instrument, but you’re in luck — they’re currently separated by a wide enough gap (about 3″) that even small scopes should resolve the two magnitude 3.5 components. Each is about 1.5 times as massive as our Sun.

It takes nearly 170 years for these stars to complete a full orbit around each other. They last came closest in 2005. 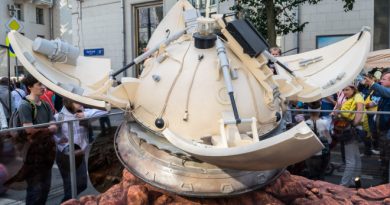