It’s true: 124 million miles (200 kilometers) might be a long way for your dog to fetch this cosmic bone. But thanks in part to two powerful telescopes, astronomers were able to inspect the dog-bone shaped asteroid Kleopatra from afar, revealing the space rock’s features in unprecedented detail.


SPHERE captured a series of images of Kleopatra as it rotated through the asteroid belt between 2017 and 2019. By imaging it at different angles, the researchers were able to get a better overall look at space rock. The observations resulted in two new studies about the far-off asteroid, which calculate the asteroid’s length at about 168 miles (270 km) across, and detail how one of Kleopatra’s lobes is larger than the other.

Kleopatra is not just unusual for its shape, but also because it has two moons. The moons, named AlexHelios and CleoSelene (after the real Cleopatra’s children) were discovered in 2008. The new result and resulting model has already shed some light on the correct orbits of the moons, correcting data that predicted them inaccurately.


The rotation of Kleopatra, as well as its rubble-pile form, could ultimately provide more information about how the asteroid’s moons came to be. Kleopatra rotates at a critical speed, according to Frank Marchis, a SETI astronomer who published one of the studies in the journal Astronomy & Astrophysics. This speed could have been so fast that pebbles lifted off the surface, forming the two moons.


As time goes on, more information about Kleopatra and other asteroids will surely emerge. But until then, the solar system’s dog-bone asteroid will retain its appeal. 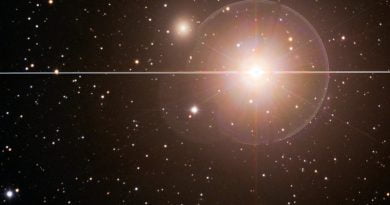 The Sky This Week from October 29 to November 5