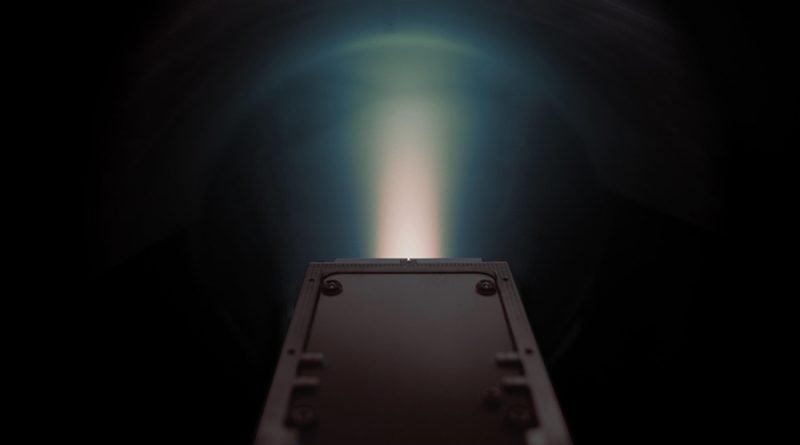 
(Inside Science) — Right now, there is a unique spacecraft orbiting our planet. Its secret is the iodine propellant it uses to maneuver in space.

The spacecraft, launched in 2020, is a type of miniaturized satellite called a CubeSat, weighing about 45 pounds (20 kilograms), and it’s the first satellite to use iodine to convert electrical energy to ion propulsion.

The mission could pave the way for a new generation of smaller, cheaper spacecraft, according to a paper published today in the journal Nature.

More importantly, iodine fuel may also make it easier to equip more low-earth orbit (LEO) satellites with propellant, which could reduce the amount of future space junk, said plasma physicist Dmytro Rafalskyi, who is one of the paper’s authors and works for the French aerospace and research company ThrustMe.

Presently, most small satellites orbiting Earth lack propellant. That’s because the most common systems are either too expensive or too big to attach to a small satellite. Without propulsion, defunct satellites remain in space, adding to the tens of thousands of useless chunks of space debris.

But iodine-powered spacecraft could make a difference.

“In 10 years, the majority of LEO satellite propulsion systems will use iodine, I hope,” Rafalskyi said. “Nowadays [space exploration is] not sustainable at all because you can’t, for example, de-orbit easily.”

Rafalskyi and his team have designed an ion propulsion system that would fit inside a cube measuring about 4 inches on a side. That’s about half the size of the next smallest system, Rafalskyi said.

Ion propulsion is considered one of the most efficient ways to power spacecraft and is used by many larger commercial satellites. But right now, nearly all ion propulsion relies on xenon gas to generate fuel, which is rare and expensive to produce.

Iodine, on the other hand, is both more prevalent and more efficient for smaller ion propulsion systems, the team reported.

Rafalskyi and colleagues launched their system on board a CubeSat on Nov. 6, 2020, and have since conducted a series of successful maneuvers. The team calculated that their iodine system has an efficiency of 60% compared to the typical 40% seen in the smallest xenon systems.

Rafalskyi sees a lot of potential for iodine, but admits that there are still obstacles to overcome before it can reach full potential. For example, Rafalskyi said iodine is corrosive, which could destroy sensitive electronics within the satellite over time.

“So there are obstacles like that, and a lot of engineering problems still, which need to be solved,” he said. “But … as soon as we show it’s possible and it can work in space, I believe that people will follow.”

This story was originally published with Inside Science. Read the original here.

Ask Astro Can a black hole form without a parent star?