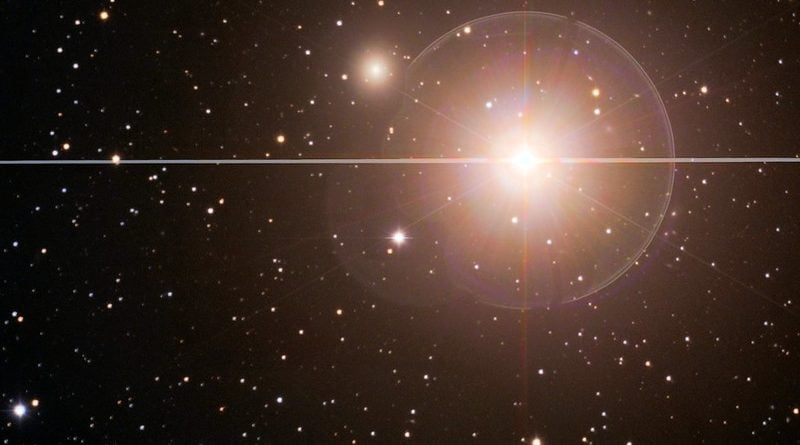 The American Association of Variable Star Observers is an amateur organization dedicated to observing celestial objects whose brightness changes over time. This year, they’re highlighting a different star each month, and November’s featured variable star is Almaaz, also known as Epsilon (ϵ) Aurigae.

Almaaz is a 3rd-magnitude star located a little less than 3.5° southwest of easy-to-spot Capella. The pair will rise around 5:30 P.M. local time tonight roughly even with each other, with Capella on the left and Almaaz on the right. Wait a little while for them to get higher, then turn your focus to Almaaz, which is part of a small asterism called The Kids. Together with Haedus I (Zeta [ζ] Aur), and Haedus II (Eta Aur), these three stars form a tall, thin triangle south-southwest of Capella.

Almaaz itself is a rare, hot, F-type supergiant star that is also in a binary eclipsing system. That means it has a partner star that crosses in front of it every 27 years — and each eclipse lasts for 2 years! When eclipsed, Almaaz appears roughly the same brightness as Haedus I (magnitude 3.7); when uneclipsed, it is magnitude 3. The last eclipse occurred between 2009 and 2011, so Almaaz is currently uneclipsed and at its brightest. Compare it to Haedus I 2.8° to its south to see the difference.

Taurus the Bull is now rising in the evening, and he’s got his eye — literally — on a visitor from the asteroid belt. Dwarf planet 1 Ceres skims a mere 7′ due south of the bright star Aldebaran tonight and tomorrow morning.

By midevening, Aldebaran is already 15° high in the east. This red giant star glows a bright magnitude 0.9 and is easy to find east-southeast of the famous Pleiades star cluster (M45). Ceres is magnitude 7.7 — much dimmer, of course, but still brighter than any other of the faint stars within 20′ of Aldebaran. You can catch the pair with binoculars or a telescope, although the former might be more difficult from an urban, light-polluted sky.

The largest body in the main belt, Ceres has been promoted from asteroid to dwarf planet. Just a bit less than 600 miles (965 kilometers) across, it was first spotted in 1801 by Giuseppe Piazzi. This relatively nearby icy world was visited in 2015 by NASA’s Dawn spacecraft, which spent the next three years in orbit, until the depletion of the craft’s fuel brought the mission to an end.

The thin crescent Moon hangs close to Mercury in Virgo this morning; see if you can catch the sight before the Sun comes up.

But the pair has more in store for us today: Our satellite passes in front of the planet Mercury in an occultation that can be seen during daylight hours from the eastern half of the U.S. and Canada. The exact moment the occultation occurs depends on your location, such as at 2:38 P.M. CST in Chicago and an hour earlier, 1:38 CST, in Kansas City, Missouri.

If you’re planning to watch the event, take extreme care — the pair will be only 15° from the Sun. If possible, try to observe from a location where the Sun will be blocked, such as by foliage or buildings. Make sure your telescope is well aligned and calibrated before you go searching out the sight and if you are particularly inexperienced, avoid trying to find it yourself — instead get help or visit a local club with experienced members. 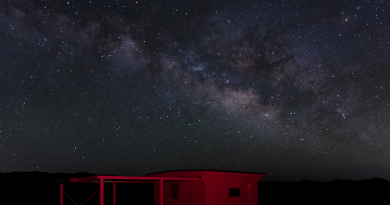 Looking into the dusty shroud of a dying star – Astronomy Now