A solar sail that tacked into the light, a keyboard used to navigate to the moon and a spacesuit-clad android are among the “artifacts of the future” in the new forward-looking display at America’s first national museum.

“FUTURES,” the Smithsonian’s first major building-wide exploration of what is still to come, invites the public to imagine “the many possible futures on the horizon” — including what was once thought and what is now considered to be the future of space exploration. Opening on Saturday (Nov. 20) and running through next July, the exhibition and festival mark the temporary reopening of the Smithsonian’s oldest museum, the historic Arts and Industries Building (AIB) on the National Mall in Washington, D.C., for the first time in nearly two decades.

“In a world that feels perpetually tumultuous, there is power in imaging the future we want, not the future we fear,” Rachel Goslins, director of the Arts and Industries Building, said in a statement. “For 175 years, the Smithsonian has been helping people better understand who we are, where we have been and where we to go.”

“With FUTURES, we want to invite all visitors to discover, debate and delight in the many possibilities for our shared future. There’s no place better to do than in the Arts and Industries Building, the nation’s original home for big ideas.”

FUTURES, designed by David Rockwell with his architecture firm, the Rockwell Group, unfolds across four environments, one in each of AIB’s four monumental halls: Past Futures, Futures that Inspire, Futures that Unite and Futures that Work. The exhibition comprises new immersive art installations, interactives, working experiments, inventions and speculative designs, as well as historic objects on loan from 23 of the Smithsonian museums, major initiatives and research centers.

FUTURES kicks off with a free virtual tour hosted by Bill Nye (“The Science Guy”), CEO of The Planetary Society on Friday (Nov. 19) at 11 a.m. EST (1600 GMT) on futuresremixed.com.

Of the nearly 150 objects on view, several are making their debut, including The Planetary Society’s LightSail 2, a spacecraft that is continuing to demonstrate flight by light in Earth orbit. As part of Futures That Work, FUTURES will display two new models of the solar sail satellite.

“It’s an honor to be included in this exhibit,” said Nye. “Who knows where solar sailing will carry us in the coming decades and beyond?”

LightSail 2, which is currently orbiting Earth in an extended mission to collect as much data as possible to inform future solar sail missions, was the first satellite to achieve controlled solar sailing using a small spacecraft, in this case about the size of a loaf of bread.

“LightSail 2 acts as a precursor to the future,” The Planetary Society said in a release. “The ability to equip a small spacecraft with a means of propulsion that does not require fuel could make deep space exploration more affordable and accessible.”

Alongside the LightSail 2 models in FUTURES is a similar vision of the future, but from 1960. “Space Sail of the Future,” an oil painting by artist Robert McCall, depicts what LightSail became — a spacecraft propelled by light from the Sun.

FUTURES examines many aspects of what may come next, from artificial intelligence to enhanced humans. Space exploration is a part of those futures, as shown by the artifacts and artwork in several areas of the exhibition.

FUTURES also displays a series of posters looking at the future of museums, including the future of space museums. A poster for the National Air and Space Museum promotes the opening of “The 1/8th Principle. How much is too much?”, an 2071 exhibit focused on asteroid mining and off-world resource extraction.

Another poster, “A Space Museum… in Space,” promotes the 2071 opening of the Smithsonian Orbital Annex. 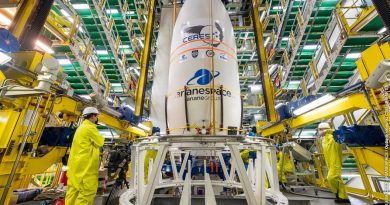