There’s been a sudden flood of Black Friday binoculars deals over the past few days, as manufacturers like Vortex and Bushnell slash prices on some of their best models. These bits of kit are excellent for stargazing; while they won’t be able to pack the power of one of the best telescopes, binoculars have the benefit of being portable and they offer great views of nearby constellations. And they tend to be cheaper than telescopes, too.

You’ll also find far more deals on binoculars this year than on telescopes. In fact, there’s a real dearth of Black Friday telescope deals right now, as the manufacturing industry is suffering from ongoing shortages. The only exception to this is Celestron, as the company seems to be offering decent discounts on some of its lower-spec models.

When you’re picking up a pair of the best binoculars for stargazing, there are a few features to watch out for. We’d recommend going with a Bak-4 Porro prism design, as well as opting for multi-coated optics. This combination should give you the best chance at seeing clear, contrasting views of the night sky. We’d also suggest opting for a pair that offers 8x or 10x magnification, and boasts apertures of around 42 – 50 millimetres. Those large apertures are key to gathering lots of light, so you’ll be able to see distant, fainter objects – and nearby stars will appear more brilliant, too.

However, those larger apertures will also make these optics rather heavy, so if you’re trying to find a pair of the best binoculars for kids you might want to try something slightly lighter. Or invest in a tripod, to help keep your binoculars steady.

We’ve pulled together the best deals we can find right now and outlined them here. This close to Black Friday, a lot of brands start hiking then dropping prices on items, to make it look like there’s a bigger saving available. We always compare prices to the RRP or the average retail cost, so you can rest assured that the below are genuine deals.

Magnifications this low are generally aimed at kids. That’s not to dismiss them, though, as these binoculars still give little ones the chance to get excited about everything from bird watching to stargazing, without tiring out their arms with the weight of heavy lenses. And as long as the diameter of the objective lens is fairly decent (we recommend 30mm as a minimum) then the binoculars should still let in plenty of light, so kids can get a clear view of the night sky.

There are a few pairs we’ve included in this section: the Celestron Cometron 7×50, which are actually our top pick for kids, alongside the super-rugged National Geographic 6×21 Children’s binos and the Vixen SG 2.1×42. This latter pair are designed for wide-field observation and offer an incredible stereoscopic depth. Below, you’ll find the best offers on all of these, depending on availability in your area.

Most people will tell you that 10×50 is the ideal magnification to aperture ratio for stargazing binoculars. While this is generally a good rule to follow, we actually think that some of the best binoculars for stargazing fall into the 8×42 category. These are the Celestron TrailSeeker 8×42 binoculars – top in our list of best binoculars overall – which have a wider field of view than 10×50 models and also boast a crisp, clear view of objects.

Also below – depending on availability – you’ll see the Opticron Adventurer T WP 8×42, Nikon Prostaff 3S 8×42 and Celestron Nature DX 8×32. All of these models are ideal for kids who are interested in stargazing and would prefer a slightly higher magnification than those found in the models above.

This is where you’ll find most of the best binoculars for stargazing. Compact enough to take with you on an astro-camping trip, but also boasting a large enough magnification to bring you closer to the constellations, they’re ideal for night sky enthusiasts. You’ll be able to pick out all the usual targets with these binos, including star clusters and bright double stars.

If they’re available in your local area, you should see the best prices for the following models below: the Canon 10x42L IS WP and Olympus 10×25 WP II (both excellent for budding young astronomers) along with the Opticron Adventurer II WP 10×50, the Vortex 10×50 Crossfire HD, the Nikon 10×50 Aculon A211 and the Celestron UpClose G2 10×50.

At this size, the binoculars are almost akin to a small portable telescope, as the 12x magnification lets you focus on deep sky objects like the Andromeda Galaxy. You might want to start thinking about using a tripod if you’re opting for models in this category, as they’re heavier and less compact than their counterparts with lower magnification – so it’s much trickier to hold these binoculars steady.

Below, you’ll find the best prices on the Celestron SkyMaster 12×60, the Nikon Action EX 12×50 and the Celestron Nature DX 12×56, depending on local availability.

At this size, there’s no maybe about it: you’re going to need a tripod. You’ll also probably have to pay out a little more for the higher magnification – but it’s well worth it if you’re a serious stargazer, as binoculars of this type will reveal everything from the detailed surface of the moon to the brightest deep sky objects.

Below, you’ll find a coupleof our favorite models, according to stock in your area: the Meade Instruments 15×70 Astro and the superb Celestron SkyMaster 15×70.

The final models in our round-up of binoculars for sale offer 25x magnification. It’s not quite the same as those offered by the best telescopes around, but it’s still very impressive. With this magnification, you’ll just about be able perceive Jupiter’s atmospheric belts in the field of view.

There’s only one model in this category that we’ve included below: the Celestron SkyMaster 25×100. These binoculars aren’t cheap, but the optics are brilliant, offering clear crisp views with great clarity and contrast.

Unfortunately, deals don’t stick around forever. Below, you’ll find discounts that are no longer available – we’ll keep them on this page for a while, so you can compare current prices with past sales. 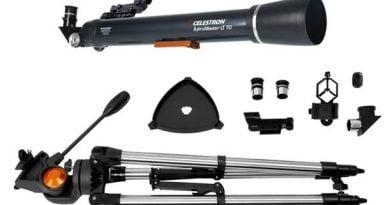