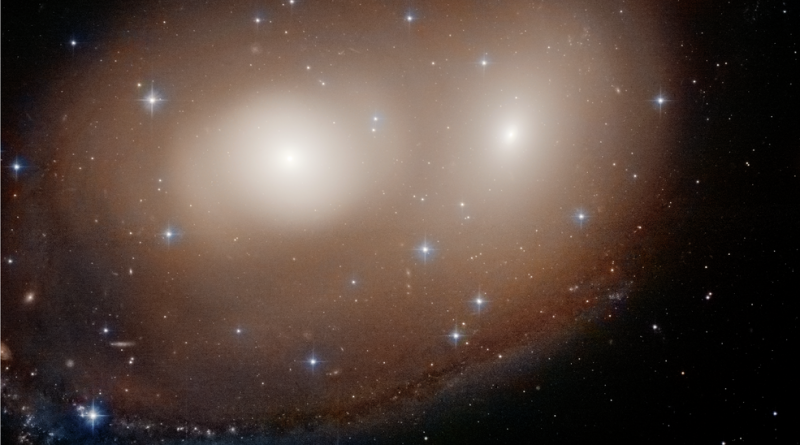 
The Hubble Space Telescope peered deep into the universe and spotted this ghoulish sight. NGC 2292 and NGC 2293 are two galaxies with aging red stars inside their spiral structures, moving closer and closer together. Eventually, they will merge to become one massive galaxy. These approaching galaxies give off their haunting red color due to their older central stars, which combine to make perfect pumpkin eyes glowing from some 120 million light-years away. Meanwhile, young blue stars dot across the bottom of the cosmic gourd, resembling the familiar haunting smile of a jack-o’-lantern.


This view of a galactic pumpkin isn’t just perfect for Halloween; the two galaxies offer an exciting look into the science of galaxy mergers. Often, when two spiral galaxies merge, they form a new type of galaxy called an elliptical. This is what astronomers commonly observe throughout our universe.


But NGC 2292 and NGC 2293 are special, as they will likely go one to form one giant spiral galaxy, which is quite rare.

However, it’ll be many, many years until these galaxies become one. This image captures just the early stages of the merger. And during our short lifetimes, we’ll never witness the final product. Mergers like this unfold over billions of years — which is actually good news for us. Currently, our Milky Way is set to merge with our nearest large neighbor, the Andromeda Galaxy, which will forever change the entire landscape of our galaxy. Now that’s a spooky thought!