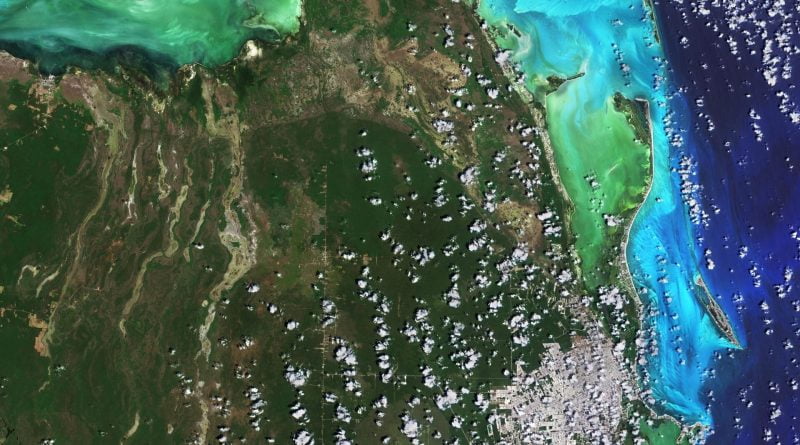 Cancún, situated in Quintana Roo on the northeast coast of Mexico’s Yucatán Peninsula, is featured in this image captured by the Copernicus Sentinel-2 mission.

Cancún’s location on the Caribbean Sea, tropical climate and string of beaches have made the city and the Riviera Maya to the south of Cancún one of Mexico’s top tourist destinations. In this image, captured on 16 April 2021, the city can be seen in the bottom-right corner, shrouded in clouds. Cancun International Airport, Mexico’s second busiest airport, is located around 20 km south of the city.

The Cancún Island resort area, visible just off the coast, is shaped like the number seven and is around 22 km in length. The island is separated from the city by the Nichupté Lagoon but is linked by two causeways at each end. Most of the tourist industry is centred on Cancún Island with its Caribbean-facing beaches.

Isla Mujeres, Spanish for ‘Island of Women,’ is visible just north of Cancún Island and is most famous for its beaches and snorkelling. Isla Contoy, visible in the top-right of the image, is considered one of the most important nesting places for sea birds in the Mexican Caribbean with more than 150 species of birds.

Quintana Roo covers an area of around 42 000 sq km and is home to several protected areas including the El Eden Ecological Reserve, located 50 km northwest of Cancún, and Yum Balam Flora and Fauna Protected Area, located in the north of the state. Encompassing more than 150 000 hectares, Yum Balam is home to several endangered species including jaguars, crocodiles and monkeys.

The colour of the water in the image varies from emerald green to turquoise owing to the changing water depths along the coast, turbidity and differences on the ocean floor – from sand to seaweed to rocky areas.

With its 13 spectral channels, Copernicus Sentinel-2’s novel imager can capture water quality parameters such as the surface concentration of chlorophyll, detect harmful algal blooms, and measure turbidity (or water clarity) – giving a clear indication of the health and pollution levels.

This image is also featured on the Earth from Space video programme. 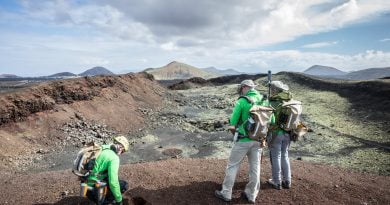 Astronaut training in the land of volcanoes 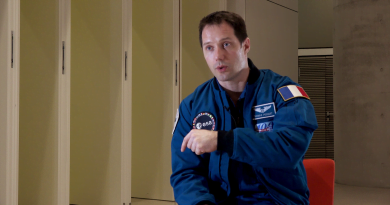 Mapping our human footprint from space