The Rosetta spacecraft included on board a small landing vehicle called Philae, which touched down on the surface of Churyumov–Gerasimenko and beamed back some memorable images. Rosetta’s twelve-and-a-half-year mission ended in September 2016, when the project controllers and scientists decided to crash the spacecraft into the comet, going out for sure in a blaze of science and glory.

Comet 67P/Churyumov–Gerasimenko is a Jupiter-family comet, which are classed as short-period comets with orbital periods of less than 20 years (67P’s period is 6.44 years) whose paths around the Sun are influenced by the huge gravitational attraction of the giant planet. Encounters with Jupiter over the past 180 years or so has profoundly affected Comet 67P/Churyumov–Gerasimenko perihelion distance (when closest to the Sun), reducing it from around four astronomical units (AU; 600 million kilometres) to around 1.21 AU (181 million kilometres).

Comet 67P/Churyumov–Gerasimenko was discovered on photographic plates in 1969 by the Soviet astronomers the late Klim Ivanovich Churyumov and Svetlana Ivanovna Gerasimenko.

Unlike at its 2015 return to the inner Solar System, Comet 67P/Churyumov–Gerasimenko is well placed for observation now; indeed, it’s been under constant scrutiny by amateur astronomers since late spring, when it shone feebly at nineteenth-magnitude in the pre-dawn sky from the UK.

Churyumov–Gerasimenko is visible at a decent altitude above the eastern horizon by about midnight GMT and culminates in the small hours. Early this month it tracks eastwards through Gemini, lying 3.3 degrees west of magnitude +4 upsilon Geminorum. Churyumov–Gerasimenko then enters Cancer on 12 November, in time for its closest approach to Earth. For accurate positions of 67P/Churyumov–Gerasimenko (or any other comet) for any date and time from your location (ephemerides), log on to the Minor Planet Center website at minorplanetcenter.net/iau/MPEph/MPEph.html

Comet 67P/Churyumov–Gerasimenko has been brightening steadily throughout the summer and early autumn, and now shines at around magnitude +9.5 to +10, predicted to be its peak brightness that’s in line with expectations. Images show it has a nice tail at least 10 arcminutes in length. Churyumov–Gerasimenko will remain in Cancer throughout December and hopefully stay close to its peak brightness.

Comet 67P/Churyumov–Gerasimenko is not the only comet that at the moment can be seen through a small- to medium-aperture telescope or fruitfully imaged.

Comet 2021 A1 (Leonard) is visible in the morning sky from about 3am GMT, by which time it lies an an altitude of around 25 degrees from London. It’s located in south-eastern Ursa Major, close the confluence of its boundaries with Canes Venatici and Coma Berenices.

Comet 2019 L3 (ATLAS) is yet another discovery, on 10 June 2019, by the Asteroid Terrestrial-Impact Last Alert System (ATLAS) survey. It’s currently brightening nicely, shining at around magnitude +10 and sporting a short tail. Comet 2019 L3 (ATLAS) is tracking south-westwards through Lynx’s far south-western quadrant, which means it’s well seen by around the midnight hour throughout this month. On 20 November, 2019 L3 (ATLAS) lies around a degree away from globular cluster NGC 2419 (Caldwell 25), the famous ‘intergalactic tramp or wanderer’.

Comet 4P/Faye is another periodic Jupiter-family comet, discovered by the French astronomer Hervé Auguste Étienne Albans Faye in 1843 at the Paris Observatory. It was at perihelion on 8 September and comes closest to the Earth on 5 December at a distance of 0.942 AU (1.4 million kilometres).

4P/Faye is slowly fading, presently shining at around magnitude +11.4 as it lies on the boundary between Gemini and Monoceros; it’s over 30 degrees up in the east-south-east by 1am GMT. 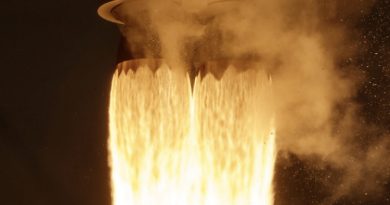 A satellite in orbit spies another satellite being launched into space

Looking into the dusty shroud of a dying star – Astronomy Now