Mountain ecosystems provide vital services to human life. Mountains sequester CO2, clean water and the air and regulate floods. Worldwide, they provide for the livelihoods of more than half of human society.

Climate change is particularly acute in mountains. The highly developed relief of the ranges creates many microclimates, ecosystems and therefore living spaces for numerous species. Quite a few of those species can only be found in mountains.

High-altitude mountain areas are projected to warm much faster than lowland regions. For the Pyrenees, which run along the border of France and Spain, warming of 0.57°C per decade has already been observed, while the rate is only 0.18°C in lowland France.

It is difficult to precisely predict temperature increases in mountains, but for the Pyrenees, the mean annual temperature has been estimated to be 2°C warmer than 1970, compared to 1.2°C in lowland France. This difference will only increase in the future.

Increased temperatures in mountain regions decrease the amount of snow that falls, causes snow and ice to melt earlier and accelerates deglaciation—the process by which glaciers retreat.

Increased temperatures also accelerate biochemical reactions such as photosynthesis in plants, increase the rates of many biological and ecological processes such as decomposition and sedimentation, organic carbon mineralisation, organismic growth (such as the time from egg hatching to metamorphosis in frogs), and biomass production (for example, the regrowth of grazed meadows).

We can thus accurately predict that profound ecological changes will follow the temperature increases that are already taking place, destabilizing mountain ecosystems.

European mountains like the Pyrenees are far from the remote and pristine ideals we often imagine, and many show the marks of centuries-long human activities. In the Pyrenees, mining activities have largely ceased, but still have an impact in the form of ongoing heavy metal pollution through increased flooding due to climate change, releasing stored heavy metals from peatbogs and peatlands.

At the same time, toxic organic pollutants are carried from lowlands to sensitive mountain ecosystems by atmospheric transport—the process of evaporation, cloud formation, wind and precipitation—but also via local activities such as the use of insect repellents by farmers and tourists.

Meanwhile, introduced fish species in mountain lakes bring with them high levels of mercury, which is known for its negative effects on the nervous system of animals and humans.

Introducing fish into mountain lakes also lead to a processes called eutrophication—where water systems are flooded with too many nutrients. Together with increased temperatures, this causes algae to bloom in greater numbers and lowers oxygen in waterways. These algae also produce poisons known as cyanotoxins in high enough concentrations to cause illness in animals and humans.

Climate change in mountains will challenge downstream freshwater ecosystems and along with them, an important source of drinking water. Water quality has already decreased and, as it is difficult to detect all the different toxic molecules in water samples, the amount of toxins in current drinking water remains unclear.

As human health is inextricably linked to animal and environmental health, it is important to understand that the Pyrenees and many other mountain ranges are not as healthy as many of us think.

In the future, they may no longer provide us with the clean drinking water, clean air and other ecosystem services we need.

We need a new approach for how we treat mountain ecosystems. That’s why many, including the Intergovernmental Science-Policy Platform for Biodiversity and Ecosystem Services, are calling for a “transformative change.”

These strides are very likely to affect many of us—we will need to drastically reduce our mobility, change our food habits (by reducing or entirely cutting out meat from our diets), and give up many of the commodities of modern life.

Transformative change in the Pyrenees specifically might include restricting access to sensitive sites for tourists and farmers, reducing herd sizes of sheep and cows, and ending the use of veterinary and human insect repellents in the mountains.

Transformative change will have to have an impact on every facet of our lives, if it has to have an effect. Our society needs to adapt to save mountains and the essential services they provide.

Provided by
The Conversation


This article is republished from The Conversation under a Creative Commons license. Read the original article.

Citation:
Climate change is transforming mountains. We must act to save them (2021, November 9)
retrieved 9 November 2021
from https://phys.org/news/2021-11-climate-mountains.html 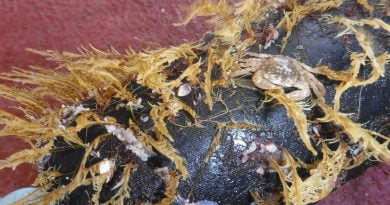 How a viral RNA changes shape to hijack host cells